“Pain, unlike anything I have ever felt”

It all started in May of 2000; when Hollie had her first kidney stone. Hollie woke up at 2:30 AM feeling like she had been stabbed. It was a pain she had never experienced. Often compared to the pain of childbirth, kidney stones affect 1 in 10 adults. Once you have had one kidney stone, there’s a 75% chance of reoccurrence.  Hollie never thought she would have another kidney stone. Unfortunately, her wish did not come true.

Searching For a Solution

Over the years, Hollie has had quite a few surgeries and procedures to help manage her chronic kidney stones.  She tried different diets, drank more water, and nothing seemed to help.  Then she found a new urologist, Dr. Michael Trotter, who set her on the right track. Dr. Trotter introduced Hollie to a product he was developing to give patients a tool in the battle against kidney stones.  She gave KSPtabs a try and started drinking them 2-4 times a day. During this time, she learned about kidney health and the importance of hydration. “I never was a big water drinker, but KSPtabs has made that easier for me,” said Hollie. “It makes me want to drink water. It’s giving me the electrolytes plus the citrate and magnesium my body desperately needs.”

As a triathlete and a “stoner,” optimal hydration is imperative to Hollie’s kidney health. Dehydration is common in athletes because of the loss of sweat during a strenuous workout. When you exercise, you lose electrolytes that can cause dehydration; this can lead to muscle cramps, decreased energy levels, and concentrated (dark yellow) urine. Concentrated urine is like fuel for kidney stone formation. To avoid concentrated urine, you should strive to drink enough water to produce 2 liters of urine a day.

One of the interesting facts about kidney stones is they form and can stay put in the body for years before they “move,” which is when you know you have a stone!  The pain may start with a dull ache that can escalate to severe, sharp pain in your back or side. It may then radiate to your lower abdomen or groin. At this point, you should seek immediate medical attention.

Hollie recently had a procedure and was told by her doctor that she is pretty much stone free after 19 years of battling kidney stones.   “I genuinely think that has to do with the KSPtabs.  The minute I wake up, I drop a KSPtab in my water,” said Hollie. “As a triathlete, I run, bike, or swim every day. Once you form any habit, it’s hard not to want to follow it, whether it’s working out or drinking enough fluid,” she said.

Hollie no longer needs to keep pain medicine with her at all times.  “My previous doctors had me carrying pain medicine when I traveled or was participating in an athletic event.  I cannot tell you how happy I am for finally being able to go out and run without having to worry about the pain kidney stones cause. I carry KSPtabs. That’s all I need.” 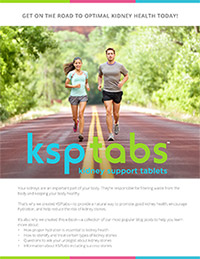