One in ten people will get kidney stones in their lifetime! For men, the risk is as high as one in five; for women, one in 11. Plus, once you get a kidney stone, there’s a 75 percent chance you’re going to get another one. According to Harvard Medical School, the lifetime risk for kidney stones has greatly increased over the last several years.

What exactly are kidney stones and what steps can you take to prevent them? First things first, there are four different types of kidney stones.  Each one is unique and it’s important to understand which type of stone you have to help you estaplish a plan to prevent them from forming and growing!

Calcium stones make up the majority of all kidney stones at 80 percent. There are two types of calcium stones, calcium oxalate (most common) and calcium phosphate—both of which can be seen on a plain x-ray.

Oxalates are a natural element in food.  But, when there’s an overabundance of oxalates in your system, they can stick to calcium in your urine to form a calcium oxalate stone. It’s important if you are a calcium stone former, to consume fewer foods on the high oxalate list, which unfortunately also includes healthy food options such as leafy greens (kale, spinach), beets, and nuts.

Phosphate stones are much less common and typically develop in patients with metabolic or hormonal disorders such as hyperparathyroidism and renal tubular acidosis.

How can KSPtabs help in preventing calcium stones?

Uric acid stones make up approximately 10% of all kidney stones. They’re usually formed in people with a high animal protein diet and people who suffer from gout. If you’ve had gout, you are 60 percent more likely to develop a kidney stone! Like calcium stones, these stones are formed in acidic urine (pH less than 7) but are not as visible on a plain x-ray.

Uric acid stones can be frequently managed through a healthy diet with plenty of fruits and vegetables. But make sure you stay hydrated, which will help dilute the extra acid in your system. Uric acid stones are the only stones that can be dissolved using a diet which in part consists of increased levels of citric acid and apple cider vinegar.

Cystine stones are the least common stones comprising only four percent of cases. The result of an inherited (genetic) disorder, cystine stones occur when there’s an excess of the amino acid cystine in the body. These stones are recurring and typically larger in size. Sadly, most patients will get their first cystine stone in their twenties or thirties.

Struvite, or infectious stones, comprise 6 percent of all kidney stones, which in contrast to most stones, form in alkaline urine. Struvite stones are more common in women, infants, and the elderly, and are often associated with recurrent bacterial urinary tract infections.

It is not uncommon for struvite stones to start as calcium stones and then colonize with bacteria that develop the struvite component of the stone.  If you had not had a stone initially, it lowers the risk of bacteria entering the urinary tract.

IT’S EASY TO FIGHT OFF STONES & SAFEGUARD YOUR KIDNEYS

Keeping your body hydrated by drinking at least 60 ounces of water a day is one key to dealing with kidney stones. KSPtabs are all-natural effervescent tablets. The recommendation is to dissolve a KSPtabs in 16 ounces of fluid intake two to three times a day to help combat the four stone types.

Achieving a neutral or near-neutral pH balance (pH closer to 7) is key to battling stones. When your urine pH is low, it creates a favorable environment for stone formation. KSPtabs contain citrate, which has been shown to support a normal urinary pH.

KSPtabs also include magnesium, which not only binds to oxalates and phosphates but helps with circulation. Additionally, the B6 nutrient in the tablets helps lower oxalate levels in the urine.

TAKE KSPTABS FOR A TEST DRIVE

Get a trial pack combo of Very Berry and Key Lime KSPtabs today. 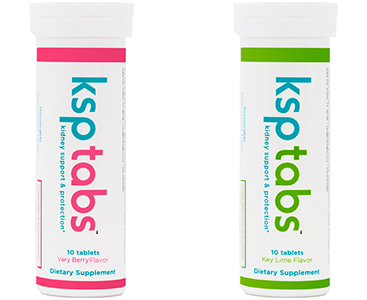 The statements on this page have not been evaluated by the Food and Drug Administration (FDA) or the Federal
Trade Commission (FTC). This product is not intended to diagnose, treat, cure or prevent any disease.